Hit enter to search or ESC to close
Insight

In the 2015 list for the world’s most innovative companies, neither Apple nor Google ranked no. 1, with Facebook and Twitter dropping off the list completely. According to Fast Company, Warby Parker (an eyewear company that started as an ecommerce startup who now makes over $100 million in revenue with retail locations around the US) was the top winner. This list also featured newcomers like the space provider, WeWork, and Cult clothing brand, American Giant, as well as Kickstarter tech companies like Oculus VR and Kano.

But regardless age or market share, the innovation challenge for almost all companies of today, is about overcoming attitudes of complacency while consistently creating and testing new ideas at much greater momentums so to keep up with the velocity of change in today’s business reality. And in doing so, it seems impossible to ignore the human dimensions such as creativity for ideation, intuition for risk taking or resilience after failing that make innovation possible.

According to researchers G.J. Tellis, J.C. Prabhu and R.K. Chandy, who conducted an innovation research study amongst 759 companies from 17 major economies, Corporate Culture is the foremost important driver of any innovation. The contributing dimensions are two-fold: the role of leadership and strategic orientation to innovation.

When Lou Gerstner became CEO of IBM back in 1993, he saw organisational culture as the DNA for engineering his company’s transformation, where individual business commitments would be used to fulfill IBM’s broader business commitments. At that time, Gerstner recognized the potential for IBM’s culture to act as an invisible force that could drive what was regarded as one of the most difficult business turnarounds within the IT industry.

And since even the greatest and most innovative business leaders are mortal beings, the only way to really ensure that IBM could escape from its insular and balkanized culture and sustain the new culture Gerstner had envisioned, was by re-defining their values, visions and beliefs that are geared towards high innovation and performance. These new cultural elements would ultimately guide the development of any new structures and processes that would cultivate the desired behaviours from within.

So perhaps before we begin to brew our ‘elixir’ for innovative success, the first and foremost step is to ensure we have the right recipe and the right pot! 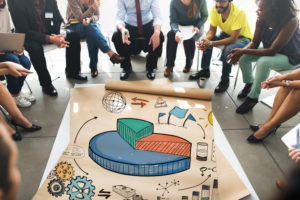 Research has shown that successful adoption of innovative ideas is rooted in the culture of an organization as much as its capabilities in execution. The recipe for embracing and harnessing the potential of innovation prescribes the combination of ingredients such as trust, collaboration and receptivity to change.

In helping senior leaders assess whether they have the right temperature and cooking tools (i.e. organisational climate and context) for its brew, researchers Jay Rao and Joseph Weintraub developed a diagnostic tool that was founded upon the Six Building Blocks of an Innovative Culture comprising both tangible and intangible determinants of an innovative organisational culture.

This tool was validated by data collected from 15 companies headquartered in the U.S., Europe, Latin America and Asia. It offers the potential to solicit a 360° view from respondents across various levels from an organization in assessing the strengths and weaknesses of their innovation culture, as well as identifying opportunities for developing innovative capacity. This balanced view is also valuable for revealing any inconsistencies between perceptions of readiness and business reality.

Nevertheless, such tools should never be used as a rubber stamp activity as each organization is inherently different. What’s important is that whichever approach organizational leaders takes in cultivating innovation, it should be done with an open mind and a close alignment to the goals and values of his/her organization.

How are organisations shifting their leadership development practice to create value in a new world: Download the report now

Accelerance UK Ltd
Registered in England and Wales No. 10193569